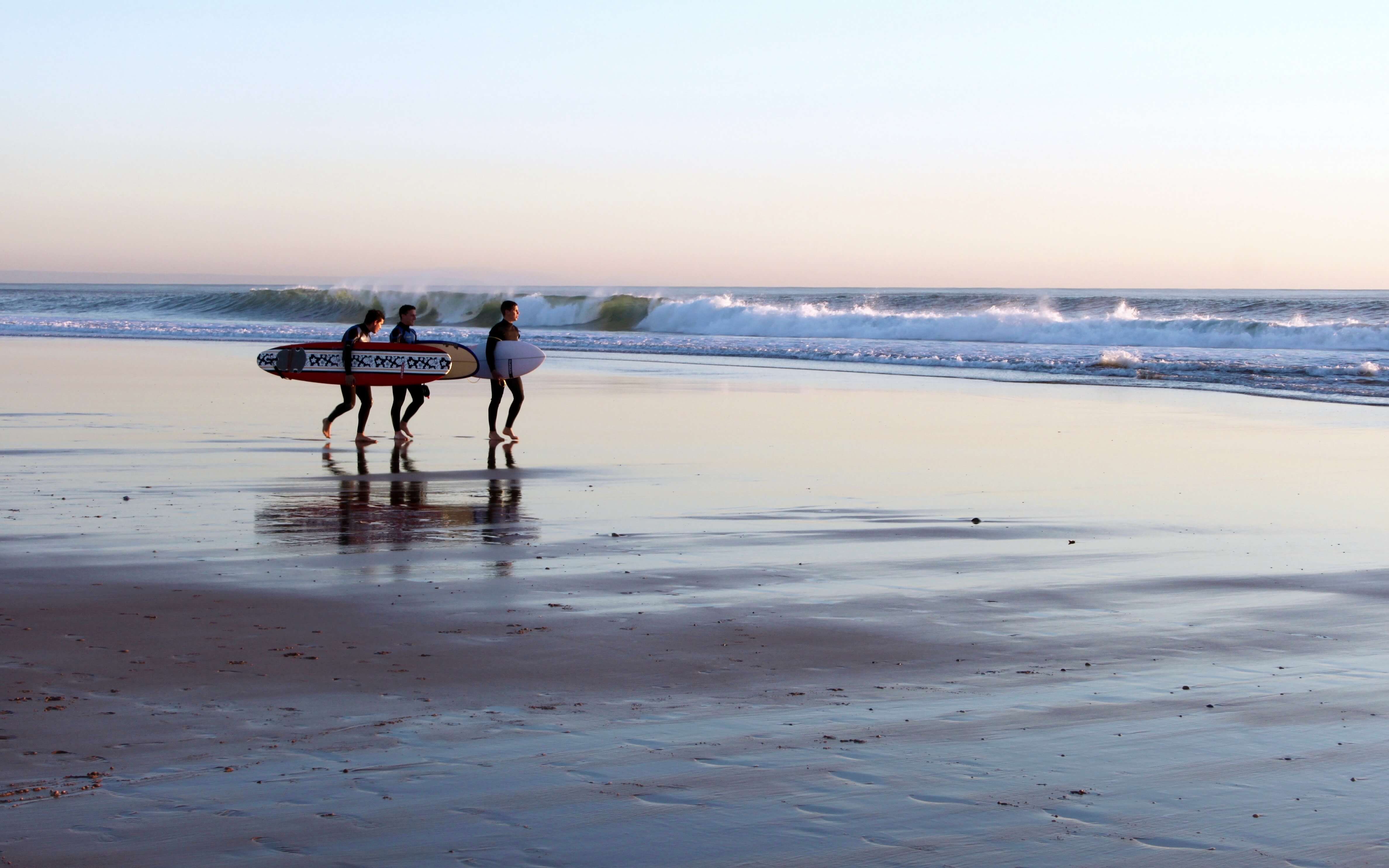 As the extensive Portuguese coast offers great waves every day,  it’s not an exaggeration that surfing is a 365 day a year activity in Portugal. Or 366 if it’s a leap year. And there are many ways to tackle them, it all depends on your skill and enthusiasm.

The diversity of natural conditions and an exceptional climate provide memorable experiences within everyone’s reach, from beginners to pros. According to many, there’s no other coastline in the world with so many spots so close to each other.

Portugal’s coastline has waves for every taste and discipline. From perfect tubes for surfing and bodyboarding, which are the setting for major international events, to giant waves, posing a challenge for the boldest surfers striving to ride their crests, and long waves that are among Europe’s longest. Not to mention, there are still a few secrets waiting to be unveiled.

The wind is a great ally and offers unique conditions for windsurfing and kitesurfing.

Set your sails for the seas and make your way to Portugal – the land of amazing wine, the most incredible accommodation and some of the world’s best surf.

This is a terrific surfing spot, with waves that tend to be best in spring, autumn, and winter. While Sagres is the epicenter of the Algarve surfing scene for its quality spots, this area offers visitors several other interesting activities to choose from. Sagres is the place to be in the minds of many who have seen pictures of its waves. On the right tide, with the right swell and the right wind, the surf can be absolutely epic. If you enjoy diving and the exceptional diversity of sea-life, be sure to visit Divers Cape for a fantastic diving experience. Also, you can drop by Cape Cruiser, a company specialising in whale and dolphin watching. Coastline Algarve is the go-to place for the best water and land tours, with specialised tour guides taking you to secluded grottoes and hidden beaches along the coastline.

One of Portugal’s best surfing spots due to its strong currents and steep waves, Amado beach regularly hosts international competitions and is very popular during the summertime. Praia do Amado attracts many surfers because it is known for its amazing waves. Due to the big and consistent waves, it is one of the best places for surfing in the Algarve. The beach faces west/northwest and the water here catches a lot of swell. Moreover, the surfing conditions are so good that international surfing tournaments are sometimes held at this beach. The waves in the winter are even bigger than in the summer.

These days Nazaré hardly needs an introduction. But just in case you are very new to surfing, Nazaré is one of the top big wave destinations in the world. As one of three stops on the WSL Big Wave Challenge, Nazaré draws a crowd of daredevils and spectators whenever it is working. If you’re in the area during a big swell, it’s worth trekking out to the headland to watch the big wave surfers towing in on jet ski’s and sometimes even paddling into monster waves that make the ground shake. Praia do Norte became famous for its gigantic waves, particularly after the month of November 2011. That was when Garrett McNamara surfed what was to be called the biggest wave of the year by the Billabong XXL Global Big Wave Awards, and gave the tempestuous, stormy sea of Nazaré an even broader international notoriety. When passing by, be sure to visit Miradouro do Suberco, a lookout point from which you can enjoy an unobstructed, panoramic view of the coastline and seaside.

Peniche is a mecca for surfers from around the world and has some of the best surf in Portugal. Peniche’s beaches help build Portugal’s reputation as the surf capital of Europe. The most mythical contributor is perhaps Supertubos beach, world-famous for its powerful waves, which many surfers call “The European Pipeline”. As far as accommodation goes, there are campsites and a few hotels between Peniche and Baleal beach, and also a selection of simple houses and apartments for rent. The ASP World Tour hosts competitions in this otherwise inconspicuous fishing village once a year, bringing crowds from all over the world to witness Peniche’s.

Also known as Ribeira das Galinhas, this beach is quiet and secluded, with large waves that made it one of the selected venues for the World Surfing Championship of 2001. The Powerful swell and crystal clear water are bound to get your adrenaline running and bring you full satisfaction. The crowd is small and the locals are known for their hospitality. Madeira enjoys a subtropical oceanic climate, due to the Azores anticyclone and the weather is often mild with some seasonal temperature variation. The maximum temperatures vary between 25 degrees in the summer and 20 in the Winter and the minimum between 20 and 30 degrees respectively. You won’t need a wetsuit to surf between July and October when the water temperature reaches 24 degrees.

Rip Curl Pro Peniche is an international surf competition organized by World Surf League (WSL). This significant event taking place every October in Peniche, Portugal. Globally, Rip Curl is considered a successful member of the "Big Three", of the surf industry alongside Quiksilver and Billabong. The excellent natural conditions in this region, particularly the wave of Supertubos and the alternative scenario of Pico da Mota contributed greatly to make the Rip Curl Peniche possible.

Book your adventure today with Portugal Airport Transfer and let us help you experience Portuguese waves at their full beauty and power.